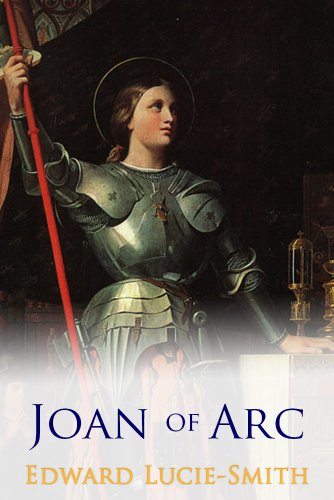 Joan of Arc was one of the greatest figures of the Middle Ages - a woman who has fascinated historians ever since.

From her sudden arrival on the pages of history, in the spring of 1429, to her humiliating execution at the stake in Rouen in 1431, Joan of Arc achieved astonishing feats that changed the face of the Kingdom of France.

The standard biographies of Joan do not give her a human face: she is a witch, a whore, a saint or a warrior, bound up in myth and legend.

Edward Lucie-Smith’s aim was 'to listen to all the witnesses - to Joan herself, to those who knew her, to the chroniclers who recorded her career, to those who preserved fragments of information about her in other documents, such as the royal accounts, and to try to construct from their testimonies a convincing portrait'.

"I began with no theory, and I end with none," he writes. "But I think that, mirrored in these multiple fragments, one does at last find an extraordinary woman - living, suffering, developing. My Joan is perhaps less admirable than the Joan who is to be found in most of the modern literature. She is intensely arrogant, violent (but afraid of her own violence), and not always truthful. She is the prisoner of an obsession, or of a group of obsessions. At the same time, she has moments … of ordinary human fear, self-doubt and depression. We may pity, admire and even love her. At the same time, we may feel a, sneaking sympathy for those who grew to detest her.'

Creating a portrait of Joan as a human being, Edward Lucie-Smith charts story of her brief life - the journey from rural Lorraine to the tensions of the Dauphin's court, the siege of Orleans, the coronation in Reims and finally Joan's trial and execution, providing a vivid, human biography of the Maid of Orleans.

Edward Lucie-Smith is a writer, poet and art critic. He has published more than twenty books, but Joan of Arc represents a return to his first love, which is history.