Showing The Decapitated Chicken and Other Stories by Horacio Quiroga 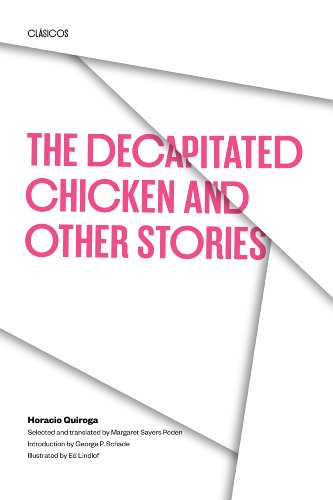 Tales of horror, madness, and death, tales of fantasy and morality: these are the works of South American master storyteller Horacio Quiroga. Author of some 200 pieces of fiction that have been compared to the works of Poe, Kipling, and Jack London, Quiroga experienced a life that surpassed in morbidity and horror many of the inventions of his fevered mind. As a young man, he suffered his father's accidental death and the suicide of his beloved stepfather. As a teenager, he shot and accidentally killed one of his closest friends. Seemingly cursed in love, he lost his first wife to suicide by poison. In the end, Quiroga himself downed cyanide to end his own life when he learned he was suffering from an incurable cancer.

In life Quiroga was obsessed with death, a legacy of the violence he had experienced. His stories are infused with death, too, but they span a wide range of short fiction genres: jungle tale, Gothic horror story, morality tale, psychological study. Many of his stories are set in the steaming jungle of the Misiones district of northern Argentina, where he spent much of his life, but his tales possess a universality that elevates them far above the work of a regional writer.

The first representative collection of his work in English, The Decapitated Chicken and Other Stories provides a valuable overview of the scope of Quiroga's fiction and the versatility and skill that have made him a classic Latin American writer.