Showing When the Odds Were Even: The Vosges Mountains Campaign, October 1944-January 1945 by Keith Bonn 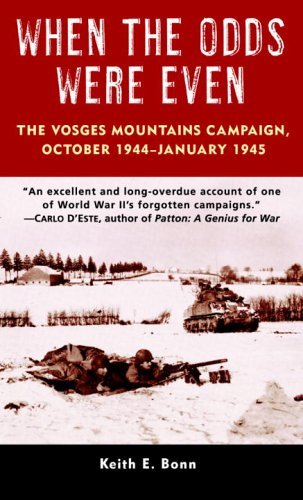 In three months of savage fighting, the U.S. Seventh Army did what no army in the history of modern warfare had ever done before–conquer an enemy defending the Vosges Mountains.

With the toughest terrain on the Western Front, the Vosges mountain range was seemingly an impregnable fortress, manned by German troops determined to hold the last barrier between the Allies and the Rhine. Yet despite nearly constant rain, snow, ice, and mud, soldiers of the U.S. Seventh Army tore through thousands of pillboxes, acres of barbed wire, hundreds of roadblocks, and miles of other enemy obstacles, ripping the tenacious German defenders out of their fortifications in fierce fighting–and then held on to their gains by crushing Operation Nordwind, the German offensive launched in a hail of steel at an hour before midnight on the last New Year’s Eve of the war.


Keith Bonn’s fascinating study of this little-known World War II campaign offers a rare opportunity to compare German and American fighting formations in a situation where both sides were fairly evenly matched in numbers of troops, weapons, supplies, and support. This gripping battle-by-battle account shatters the myth that German formations were, division for division, superior to their American counterparts.