Showing The Canadian Army and the Normandy Campaign: A Study of Failure in High Command by John A. English 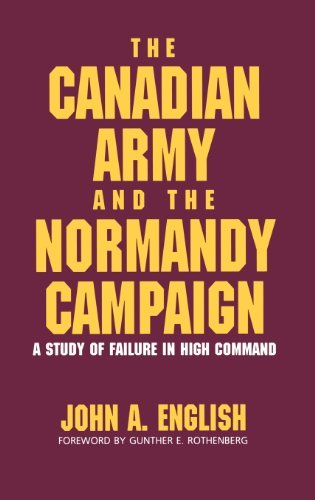 The reverses experienced by Canadian troops during the late stages of World War II continue to be the subject of intensive inquiry among military historians. Going beyond the obvious immediate causes of these setbacks, the author presents a detailed historical examination of the role of the Canadian army in Normandy and of the organization, training, and fighting-style that the Canadians brought to the battlefield in 1944.

In Book I, the author analyzes the impact of the British military model on the Canadian corps in terms of doctrine, training, command and staff appointments, equipment, and organization. He discusses the contribution of Canadian troops in World War I and the failure of the Canadian military to maintain a high level of professionalism in the interwar period. Drawing on archival records, particularly Montgomery's personal correspondence, the author offers new information on attempts to turn Canadian troops into an effective fighting force as late as 1943. Book II presents a critical analysis of Canadian operations in Normandy. The author gives special attention to the Canadian Army's inability to close the Falaise Gap in a timely manner--a delay that may have prolonged the war in Europe by several months. Providing both theoretical and practical perspectives on the relationship of peacetime preparation to the operation of large field forces in battle, this work will be of interest to students and buffs of military history and to professional analysts and strategic planners in the armed services.