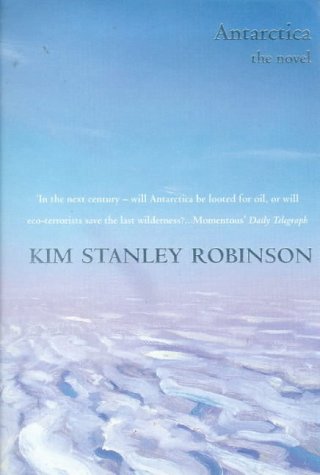 In the near future Wade Norton has been sent to Antarctica by Senator Phil Chase to investigate rumours of environmental sabotage. He arrives on the frozen continent and immediately begins making contact with the various scientific and political factions that comprise Antarctic society. What he finds is an interesting and diverse mix of inhabitants who don't always mesh well but who all share a common love of Antarctica and a fierce devotion to their life there. He also begins to uncover layers of Antarctic culture that have been kept hidden from the rest of the world, some of which are dangerous indeed. Events are brought to a head when the saboteurs--or "ecoteurs" as they call themselves- -launch an attack designed to drive humans off the face of Antarctica. This is Kim Stanley Robinson's first book since his award-winning Mars trilogy, and while some of the themes may be familiar to seasoned Robinson readers the book is never less than engrossing. As usual Robinson does a masterful job with the setting of his story, and anyone interested in Antarctica won't want to miss this one. --Craig Engler, Amazon.com