Showing Inherit the Alamo: Myth and Ritual at an American Shrine by Holly Beachley Brear 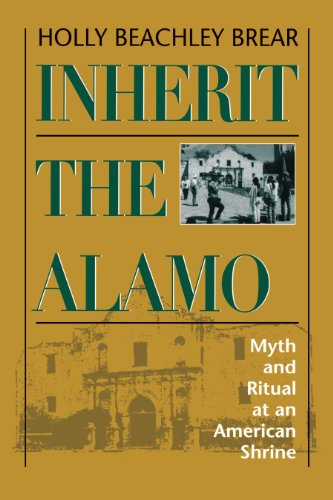 Long overshadowed by the towering buildings of downtown San Antonio, the modest little Alamo still evokes tremendous feeling among Texans and, indeed, many other Americans. For Anglo Texans, the Alamo is the "Cradle of Texas Liberty" and a symbolic confirmation of Manifest Destiny. For Hispanic Texans, however, the Alamo has increasingly become a stolen symbol, its origin as a Spanish mission forgotten, its famous defeat used to exclude Hispanics from an honorable place in Texas history.

In this important new book, Holly Beachley Brear explores in fascinating detail what the Alamo means to the numerous groups that lay claim to its heritage. She shows how Alamo myths often diverge from the historical facts—and why. She decodes the agendas of various groups, including the Daughters of the Republic of Texas (who maintain the Alamo buildings and grounds), the Order of the Alamo, the Texas Cavaliers, and LULAC. And she probes attempts by individuals and groups to rewrite the Alamo myth to include more positive roles for themselves, as she explains the value in laying claim to the Alamo's past.

With new perspectives on all the sacred icons of the Alamo and the Fiesta that celebrates (one version of) its history each year, Inherit the Alamo is guaranteed to challenge stereotypes and offer new understanding of the Alamo's ongoing role in shaping Texas and American history and mythology. It will be of interest to a wide popular and scholarly audience.