Showing Journal of the Waterloo campaign by Cavalié Mercer 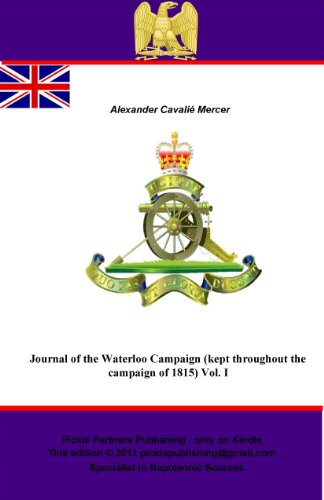 Without doubt, one of the finest accounts of a participant of the Waterloo campaign. Mercer was famously in charge of "G" troop RHA during the campaign, and from the journal he kept at the time he formed this book. It is written with a jaunty air more often seen in the writings of French cavalry officers memoirs, a certain irreverence to rank and custom (his description of the Duc de Berri is particularly cutting) and a keen eye for detail and the anecdote. This edition is the first volume of a two volume series as originally published.

Having been stationed in Belgium for over a month during which time he offers a number of telling remarks on the country and its inhabitants, and their enthusiasm for the conflict, his troop arrived belatedly at the battle of Quatre Bars on the 16th June 1815 as the fighting died down. He was involved in covering the retreat of the Allied forces northward to Waterloo on the 17th. During this retreat Mercer sights Napoleon riding with the vanguard of his advanced forces, as he struggles to cover his retreating comrades, in a moment he refers to as "sublime".

During the battle on the 18th his troop is in the thick of the fighting, during which time Mercer's account leaves no detail out, apart from his disobeying Wellington's order to avoid counter-battery fire. As the battle rolls on the magnificent and yet foolhardy charges of the massed French cavalry are recounted with their brave but ultimately futile attempt to break the squares on the ridge, Mercer and his troop pour fire into the horsemen mercilessly. As the Armée du Nord recoils from its final attack in disarray, Mercer is ordered with his men to follow up the retreating hordes, he replies to his superior "How?" as the charnel house surrounding his position contains the dead and dying horses needed to pull his guns.

The Text, whole and complete, is taken from 1870 edition, published by William Blackwood and Sons, Edinburgh