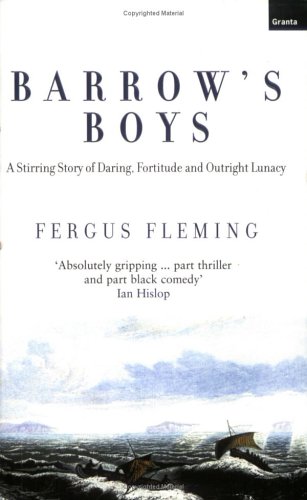 There's something about the overwhelming emptiness and terrifying beauty of the polar regions that never fails to attract. They are the most powerful symbols we have left of a world where human-made laws and values count for nothing; no one conquers the frozen wastelands-- they merely learn to live by the rules nature dictates. It is easy to see how for a long time the lives of the polar explorers were shrouded in quasi-mystical and heroic terms. This all changed in the 1970s with the publication of Roland Huntford's magnificent biography, Scott and Amundsen, in which he systematically and methodically revealed the levels of incompetence and arrogance with which Scott's expedition was riddled.

In Barrow's Boys Fergus Fleming takes us on an incisive and witty journey through the landmark years of British exploration from 1816-1850, marvelling at both the bravery and the stupidity involved. Fleming is a historian first and foremost, so he begins by placing exploration in its context. It wasn't some high-minded idealism or wacky sense of adventure, as is often suggested, that placed Britain at the forefront of discovery, but economics and self-interest. At the end of the Napoleonic wars, the British Navy was too large for its peacetime needs. Officers were laid off and advancement was slow, so the Navy needed to find itself a role. Charting the unmapped areas of the world seemed as good an idea as any.

Step forward John Barrow. Barrow was only the Second Secretary at the Admiralty--not normally a position of great influence--yet he was a skilled politician, and he managed to carve out a niche for himself by organising expedition after expedition. He started inauspiciously by sending Captain James Tuckey off on an ill-fated jaunt up the Congo in search of Timbucktoo, which was then imagined as some African El Dorado, and he ended in failure with the loss of Franklin's expedition to find the North West Passage. In between he courted triumph and tragedy; Ross discovered Antarctica, Parry opened up the Arctic with his attempt on the Pole, and Captain Bremer failed to establish northern Australia as the new Singapore.

Fleming has a great feel for the telling detail. He doesn't get lost in endless minutiae that distract from the narrative, but he never fails to remind us of the surrealism of British 19th-century exploration--cocked hats and reindeer-drawn sledges in the Arctic, frock coats in the Sahara. When put like this, it makes it all too easy to see how Scott could have been allowed to have botch his journey to the South Pole quite so catastrophically. --John Crace