Showing The Wizard of Santa Fe by Simon Hawke 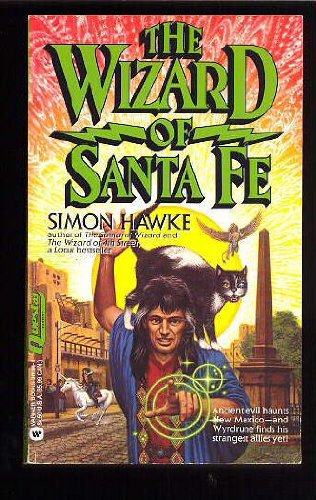 It starts again--murdered girls, their souls sucked from their bodies... DARKNESS IN SANTA FE The Pueblo Indians called it the Dancing Ground of the Sun, but now an evil force from the dawn of time threatens to turn this peaceful city into a place of eternal darkness. With the coming of the Second Thaumaturgic Age magic has returned to the city, and it is here that adept Paul Ramirez hopes to pass on the old knowledge he has gained from the legendary Merlin Ambrosius. Soon, however, he'll find himself tracking down a vicious killer--and in league with a beautiful burglar, a dropout warlock, a cockney punk possessed by spirits, and a tough-talking one-eyed cat named Gomez. He'll need all the help he can get ... on a Santa Fe trail of necromancy fast turning into a blood-soaked Festival of the Damned!