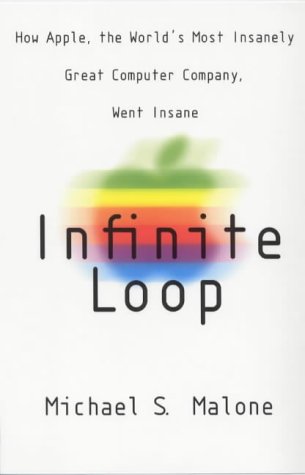 Apple Computer has made for good copy over the years. From its beginnings in the garage owned by Steve Jobs's parents and the launch of the Macintosh to the regimes of John Scully and Gil Amelio, Apple's story is irresistible and has been captured in several books. Now in Infinite Loop, Michael S. Malone offers what may be the best rendition yet of Apple's storied past.

Malone's account begins deep in the heart of Santa Clara Valley and the early lives of Apple's two founders, Jobs and Steve Wozniak. Malone seamlessly interlaces his accounts of the forces that shaped the two Steves--from the nascent electronics industry of the '60s and companies such as Sylvania and Hewlett Packard to Jobs' work at Atari and his repeated and often deceitful manipulation of his genius friend, the Woz. From these early beginnings, Malone takes the reader through the life of Apple Computer: its founding and launch of the Apple I, the return of Steve Jobs, the rollout of the iMac. In the end, Malone, a journalist who grew up in Silicon Valley and first covered Apple in 1979, writes that Apple was a company with lots of attitude but one that was bereft of character and only when that fact was laid bare "did the essential hollowness of the enterprise stand exposed." Infinite Loop is a wonderfully written, even gripping, corporate biography that anyone who has fallen under Apple's spell will enjoy. Recommended. --Harry C. Edwards, Amazon.com