Showing A Woman Unknown: Voices from a Spanish Life by Lucia Graves 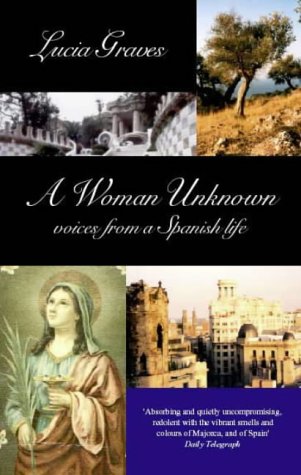 Evidence would show that it is not easy having a famous father. Lucia Graves was 3, her father Robert 48 when in 1946 he moved his family to his house on Majorca. Her brother William wrote his own candid version of their childhood, Wild Olives, which painted the poet-father as a rather foolish, self-engrossed man; those seeking similar titillation here will be disappointed, as Robert glides in and out of the narrative only infrequently, and then for the most part affectionately. Lucia may ignore his more questionable behaviour, but this is her story.

It is at once an account of life and a life in post-war Spain. The book is framed by a trip to Barcelona undertaken by Lucia and her mother Beryl in 1996 for an operation on the latter's eyes (coincidentally, St Lucia is the patron saint of good eyesight). The style is elegant and reassuringly poetic, without the ego that could overwhelm her father's writing; indeed, she has a defensive reflex to use others' voices and lives when one might expect her own. She connects her development with that of Spain, but in fact her situation is more complex, for she occupies a hinterland between two cultures, at times a hybrid, at others a vacuum, inhabiting the space similar to that occurring between a word and its translation. Fittingly, translation became her art, and on the day she finished translating her father's "Wife to Mr Milton" into Spanish, he died. At a time when the confessional seems de rigeur, it is refreshing to read an autobiographical work that is more catharsis than confession, written with a dignified engagement both moving and instructive.David Vincent