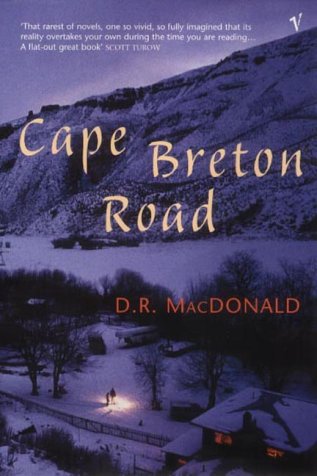 D.R. MacDonald's debut novel centres around the explosive relationship between man and nature; men whose souls are fading as surely as their history and culture seeps away, and a nature so fiercely uncompromising it takes on a spectral, sinister force of its own.

Deported from Boston for habitual car theft, 19-year-old Innis finds himself back in his native Nova Scotia, on remote Cape Breton Island, where MacDonald himself was born and where a wrong turn could cost a life in the dense, snow-laden woods. Holed up in the old family farmhouse with his reluctant uncle, spiky TV-repair-man, Starr, whose penchant for booze and girls leaves little time for supervising an errant nephew, Innis looks for an early escape route. His mind soon focuses on the promise of Spring and with it the chance to plant his attic-nurtured pot seedlings way up in the hills, far from prying eyes. But, in the way of blindly arrogant youth, Innis doesn't reckon with forces as strong and stronger than nature.

As the ice slowly melts around him and the sun bakes the earth, the forces of love and trust have devastatingly destructive effects on Innis and those around him. With few distractions--the nearest town is a car-ride away--Innis is drawn into the community, old Gaelic-speaking families, whose language and way of life may be melting with the snow, but whose sense of their surroundings gives them an inner knowledge no outsider could learn. Then, unexpectedly, a wild card is delivered into the heart of their harsh, male world: Claire, pretty, frivolous and fun seeking, moves into the room next to Innis, and nothing is the same again.

Cape Breton Road is as much an elegy to a fading way of life, frozen in time, as it is a deeply disturbing lament on 21st-century man and his search for identity, belonging and purpose. --Carey Green