Showing The Diagnosis by Alan Lightman 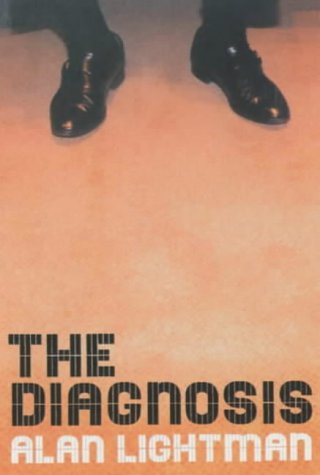 In the bravura opening chapter of Alan Lightman's novel The Diagnosis, a nameless horror befalls Boston businessman Bill Chalmers in the hubbub of his morning commute. As he jostles his way aboard the train and makes cell-phone calls to check last-minute details on his morning meeting (for Bill is punctilious), a realisation surfaces in his brain, "like a trapped bubble of air rising from the bottom of a deep pond". He has forgotten where he's going. All he can remember is his anxious urgency and his company's creed, "The maximum information in the minimum time". Acutely aware that he's got a 9:15 appointment, but recalling only the first six digits of his phone number, Bill helplessly gazes out the window. "Trees flew by like flailing arms ... Railroad tracks fluttered by like matchsticks. Trees, white and grey clapboard houses with paint peeling off, junkyards with stacks of flaccid tires". Lightman's Kafka pastiche is as pitch perfect as his verbal music: note the rhyming x sounds in stacks and flaccid (which is not pronounced "flassid").

Terrifyingly soon, Bill is mad, homeless, beaten and experimented on by comically evil doctors. He recovers and reunites with his family, but inexorably, mysterious paralysis ensues. Doctors try to diagnose him. Coworkers offer empty condolences and plot to steal his fast-track job. His wife seeks consolation with a passionate virtual lover on the Internet, a professor she's never met in the flesh. His teenage son triumphantly hacks into AOL's Plato Online, and Bill's last days are counterpointed with the trial of Socrates and his troubled, rich inquisitor Anytus. Instead of the real story, we get a second shimmering Lightman fable. Anytus's strife with his rebel son, a Socrates supporter, parallels Bill's grief as his son is distanced from him by illness.

Though I felt glimmerings of understanding from time to time, I never did fully figure out exactly what the Socrates story and Bill's decline have to say about each other, nor what Bill's paralysis says about modern times. I implore a smarter reader to explain it to me in the customer comments below. But I can tell you that every character is resonant, and every sensory particular is exquisitely precise, as in Lightman's biggest hit, the Italo Calvino pastiche Einstein's Dreams. --Tim Appelo