Showing A Feast in Exile by Chelsea Quinn Yarbro 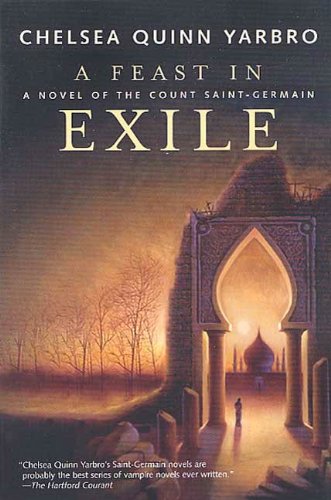 A Feast in Exile draws readers back to the time when the Mongol hordes of Timur (known in the West as Tamerlane) swept across fourteenth-century India and Asia. Delhi's civilized veneer crumbles along with its walls. Foreigners, which the vampire Saint-Germain-here called Sanat Ji Mani-surely is, lose their positions, homes, wealth, and sometimes their lives, if they cannot escape the falling city.

Before he can flee Delhi, Sanat Ji Mani must ensure the safety of Avasa Dani, his beautiful ward, who has been abandoned by her husband. Sanat Ji Mani's love has awakened Avasa Dani's every sense; even she will become a vampire upon her death, but she finds no terror in this fate.

Avasa Dani and Rojire, Sanat Ji Mani's servant, successfully make their way out of Delhi, but Sanat Ji Mani himself is trapped. His life is bought by his skills with medicine, but, at Timur's command, he must travel-by day, and exposed to the sun-with the conqueror's army. Crippled and unable to escape, he knows that his vampire nature will soon be revealed, and then...

Avasa Dani, with a worried Rojire at her side, considers her options as a woman without a visible male protector in a land and time ruled by men. While one of Sanat Ji Mani's allies searches desperately for the missing vampire, Saint-Germain and a young acrobat, with whom he has escaped from Timur's forces, make their slow and painful way to freedom. The journey changes them both forever.


At the publisher's request, this title is being sold without Digital Rights Management software (DRM) applied.