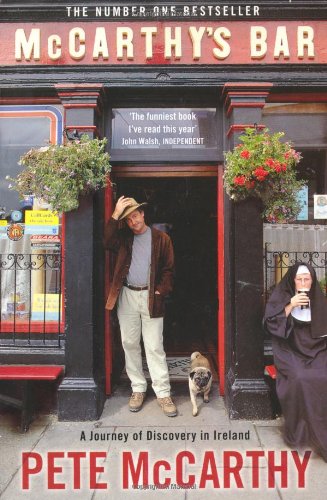 The premise of Pete McCarthy's first book, McCarthy's Bar, is that you should never pass up the opportunity of having a drink in a bar that shares your name. There is clearly more to this plan than the obvious publicity stunt, since it could work with books as well--try reading Cormac McCarthy after reading this hilarious, informed and intelligent book, and you may well be tempted to buy books by every other McCarthy around. Born in Warrington, Pete McCarthy decides to go back to rural Ireland, to rediscover his Irishness. The feeling that you have heard this sort of thing all before doesn't last for long. There is a serious writer struggling to make himself heard above the many excellent jokes and this is what makes McCarthy's book so distinctive. Although he can crack Brysonesque quips with the best of them ("I've often wondered how businessmen used to cope before [mobile phones] were invented. How did they tell their wives they were on the train?"), and take us through hilarious and largely drunken set-pieces, McCarthy is equally at home discussing Celtic standing stones and the potato famine.The resulting book is a wonderful debut. By the end, we, too, would like to move to Ireland. You sense that McCarthy has such a genuine feeling for Ireland, Irishness and Irish history that he can only temper his writing with side-splitting humour. In this way, his first book successfully embodies much of what it is to be Irish. --Toby GreenPete McCarthy's tale of his hilarious trip around Ireland has gained thousands of fans all over the world. Pete was born in Warrington to an Irish mother and an English father and spent happy summer holidays in Cork. Years later, reflecting on the many places he has visited as a travel broadcaster, Pete admits that he feels more at home in Ireland than anywhere.