Showing Thirteen and a Day: The Bar and Bat Mitzvah Across America by Mark Oppenheimer 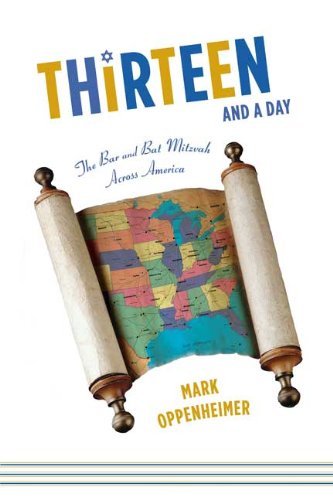 Since its emergence here a century ago, the bar or bat mitzvah has become a distinctively American rite of passage, so much so that, in certain suburbs today, gentile families throw parties for their thirteen-year-olds, lest they feel left out. How did this come about? To answer that question, Mark Oppenheimer set out across America to attend the most distinctive b'nai mitzvah he could find, and Thirteen and a Day is the story of what he found- an altogether fresh look at American Jews today.

Beginning with the image of a party of gaudy excess, Oppenheimer then goes farther afield in the great tradition of literary journalists from Joseph Mitchell to Ian Frazier and Susan Orlean. The two dozen Jews of Fayetteville, Arkansas, he finds, open their synagogue to eccentrics from all over the Ozarks. Those of Lake Charles, Louisiana, pass the hat to cover the expenses of their potluck dinner. And in Anchorage, Alaska, a Hasidic boy's bar mitzvah in a snowed-in hotel becomes a striking image of how far the Jewish diaspora has spread. In these people's company, privy to their soul-searching about their religious heritage, Oppenheimer finds that the day is full of wonder and significance.

Part travelogue, part spiritual voyage, Thirteen and a Day is a lyrical, entertaining, even revelatory look at American Jews and one of the most original books of literary journalism to appear in some years.