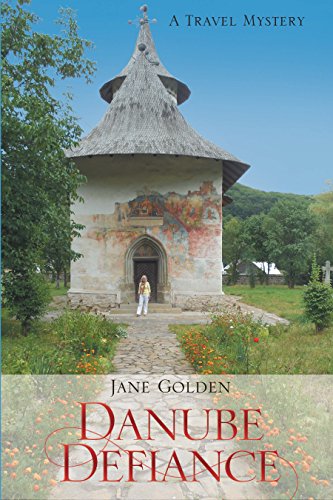 DANUBE DEFIANCE, by critically appraised novelist JANE GOLDEN, is an enthralling mystery about an art heist involving ancient icon art. Travel with super sleuth, Jeni, as she ventures through the antique markets in New Orleans' French Quarter and across the ocean to Eastern Europe's bustling city of Bucharest and the Romanian countryside. Jeni stumbles upon one clue that leads to others. Something doesn't add up, and she gathers a few friends... an antiquities expert, a journalist, and a dashing New Orleans shopkeeper. Together, they follow a river of clues and dead bodies. But will the thieves get them first? Read to find out!


"Nothing makes an overworked genre like mystery seem quite so fresh as a story set in an exotic locale. SECRETS IN THE VINES takes this theory to heart, offering up a murder mystery set in the wine country surrounding Romania. It's a winning formula." "Author Jane Golden drew on her own time in Bucharest to set up this tale, and it pays off nicely. Observations about the life of a foreigner trying to make sense of a new culture are spot-on and often funny; thoughts about parking customs and the laconic pace of government reflect an outsider's tendency to compare things to life at home, while also taking us deeper into the atmosphere. The mystery is gripping, but it's the setting that steals the show." The review concludes with this about SECRETS IN THE VINES: It has a "terrific pacing and a plot that ends well." Better yet, the reviewer states that "we're left wanting more of this juicy escapism."


"An engaging mystery that turns the classic expatriate dream on its head."