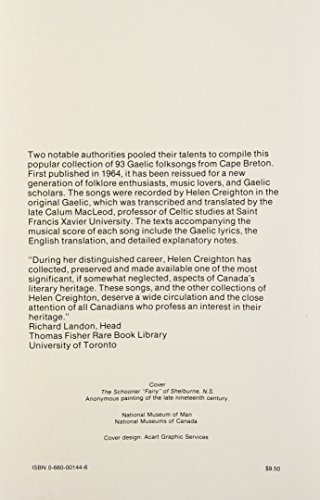 Two notable authorities pooled their talents to compile this popular collection of 93 Gaelic folksongs from Cape Breton. First published in 1964, it was re-issued in 1979 for a newer generation of folklore enthusiasts, music lovers and Gaelic scholars. The songs were recorded by Helen Creighton in the original Gaelic, which was transcribed and translated by the late Calum MacLeod, professor of Celtic studies at Saint Francis Xavier University. The texts accompanying the musical score of each song include Gaelic lyrics, the English translation, and detailed explanatory notes.