Showing Genius of the People: The Making of the Constitution by Charles L. Mee Jr. 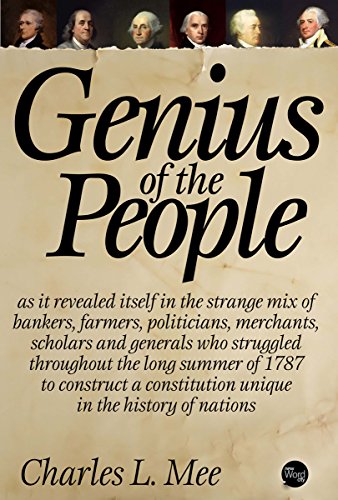 "Charles Mee has recreated the vivid drama of 1787 . . . Genius of the People is an absorbing look at the incomparable personalities who brought us our Constitution."
- Michael Beschloss

Genius of the People is a timely account of how America's national government came to be born during the Constitutional Convention of 1787. Charles L. Mee, Jr., vividly describes the personalities, issues, conflicts, and implications of an epoch-making meeting of brilliant and not-so-brilliant political leaders, who had different and often opposed agendas and whose disagreements and compromises, alliances and feuds, vision and shortsightedness create the main storylines of the years to come.

Mee sets the events and issues of the Convention against a background of a small but diverse society that had just won its independence and was already wracked with dissension and factionalism as to how it should be governed. The axial line of Mee's account is the ongoing struggle between what he calls the party of liberty and the party of order. On one side was the loose coalition of states' rights and local government people, such as the patrician democrat George Mason, the tenacious Puritan shopkeeper Roger Sherman, and the prototypical Southern politician John Rutledge. Opposed to them and their followers was the coalition of nationalists led by the frail but resourceful James Madison, the arrogant Gouverneur Morris, and the brilliant, aristocratic Alexander Hamilton.

These two broad positions roughly organized a myriad of different interests, ideals, and whims. Forced by their disagreements to one unpleasant compromise after another, the delegates finally found themselves compelled to resort to a set of general principles based on the American experience that people are most secure and most free when power is not gathered up in the hands of a few - not the president and his friends, or of a class of businesspeople or landed gentry, or of the military, or of a group of politicians.

Without partisanship, Mee has written a history of the Convention for our own time. On virtually every page, his reporting on the proceedings undermines the view of many Americans of the Constitution as a rigidly fixed screed of political fundamentalism. At the same time, Mee invigorates and challenges the reader's faith in American democracy. He shows us our dissatisfied and contentious Founding Fathers entrusting their own class interests and power to the genius of the American people for self-government, knowing fully that only a politically informed and active public could preserve their work.