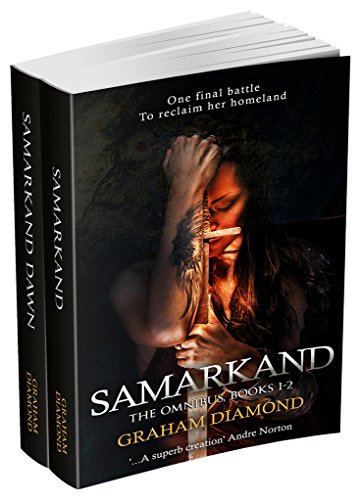 
‘Graham Diamond has written a novel that stands out and dares to be different.’ Rising Shadow

Samarkand, the fabled city and beloved home to Princess Sharon, is under threat from a million Mongol barbarians. Daughter to Amrath, cousin to the emir of Samarkand, she is left within the palace as the battles begin.

Sharon has only one choice to make: to stay and try to survive – or run.

If she escapes, there is no promise that her people could ever reclaim Samarkand, her homeland.

Fleeing to the hills against the burning backdrop of her former home, she meets the tribe of the Kazir.

Could Sharon hold the key to this prophecy?

Behind the bloody walls of the palace, Samarkand’s ruthless new ruler, the great Khan, controls the city with force and depravity.

Treachery, deceit and lechery are rife within the palace.

And far below, deep within the catacombs, a shrouded figure plans to use that dissension for the downfall of nine men. It is the Princess Sharon, once heir to the throne.

She has been transformed by the Khan’s cruelty into an avenging angel. And she has also been transformed, by the hidden secrets of the hill tribesmen, into a devil sorceress.

The princess will have her revenge.

None will stand in her way…

Praise for Graham Diamond’s The Haven:

‘The Haven is a superb creation and I have been recommending it to all. The Haven stories are a wonderful experience’ — Andre Norton

‘Graham Diamond has written a novel that stands out and dares to be different.’ Rising Shadow


Graham Diamond began writing as a fantasy and science fiction author. He was born in Manchester, England, but was raised in New York City. He is best known for books such as The Haven, Lady of the Haven, The Thief of Kalimar, Slack Midnight, Chocolate Lenin and Forest Wars. He soon turned to other genres; including historical fiction, thrillers, and later a true story of a Holocaust survivor’s family during World War II, Maybe You Will Survive. Diamond was employed as an editorial artist by the New York Times for many years, and has also taught creative writing in both New York and California.