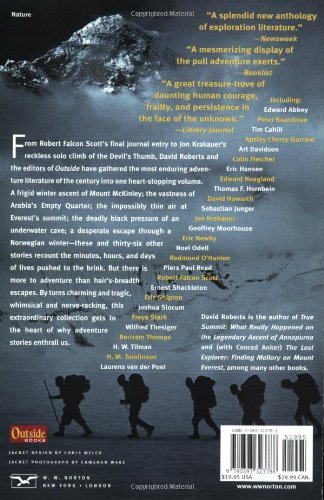 Paperback. Pub Date: 2003 Pages: 608 Publisher: WW Norton & Co. This anthology of the best adventure writing to emerge from the 20th century includes such adventures as a freezing winter ascent of Mount McKinley; a journey across the by Vastness to of Arabia's Empty Quarter; experiencing the impossibly thin air at Everest's summit or the deadly b lack pressure of an underwater cave. The stories recount the courage and persistence of people pushed to the limit. Among the writers included are Edward Abbey. Tim Cahill. Edward Hoagland. Sebastian Junger. Eric Newby. Enrnest Shackleton. Freya Stark and Wilfred Thesiger.