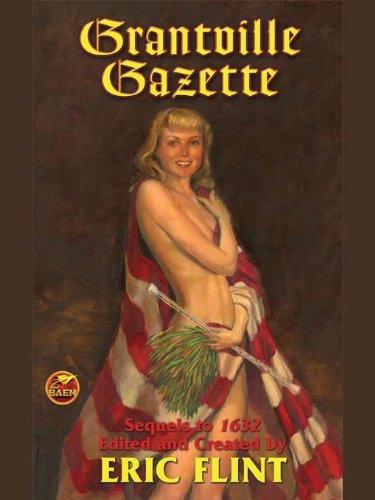 Ed Piazza, the Secretary of State of the small United States being forged in war-torn Germany during the Thirty Years War, has a problem on his hands. A religious conference has been called in nearby Rudolstadt which will determine doctrine for all the Lutherans in the nation. The hard-fought principle of religious freedom is at stake, threatened alike by intransigent theologians and students rioting in the streets.

As if that weren't bad enough:


Virginia DeMarce's "The Rudolstadt Colloquy" is just one of the stories in the Grantville Gazette. In others:

In Loren Jones' "Anna's Story," a young German girl whose family was ravaged by mercenaries is taken in by an old American curmudgeon living on borrowed time.

"Curio and Relic," written by Tom Van Natta, tells a story about Eddie Cantrell before he wins glory and loses a leg at the Battle of Wismar. Eddie learns some lessons in life as well as marksmanship from a Vietnam war tunnel rat who is himself making a difficult transition to the new world created by the Ring of Fire.

In Gorg Huff's witty "The Sewing Circle," four American teenagers set themselves the goal of launching a new industry, waging an uphill battle against adult skepticism as well as the intrinsic difficulty of the project itself. Just to make their life more complicated, an ambitious seventeenth-century German blacksmith is angling to marry into their budding commercial empire and take it over lock, stock and barrel.

In addition to these stories, the Grantville Gazette contains factual articles written by some of the people who developed the technical background for the novels 1632 and 1633. And Eric Flint has assembled a collection of portraits of prominent figures of the seventeenth century who figure in the 1632 series, along with a commentary explaining who they were and why they were important.

Eric Flint is the author of the New York Times best seller 1634: The Galileo Affair (with Andrew Dennis)—a novel in his top-selling "Ring of Fire" alternate history series. His first novel for Baen, Mother of Demons, was picked by Science Fiction Chronicle as a best novel of the year. His 1632, which launched the ring of Fire series, won widespread critical praise, as from Publishers Weekly, which called him "an SF author of particular note, one who can entertain and edify in equal, and major measure." A longtime labor union activist with a master's degree in history, he currently resides in northwest Indiana with his wife Lucille.