Showing YONKERS Yonkers!: A story of race and redemption by Patricia Vaccarino 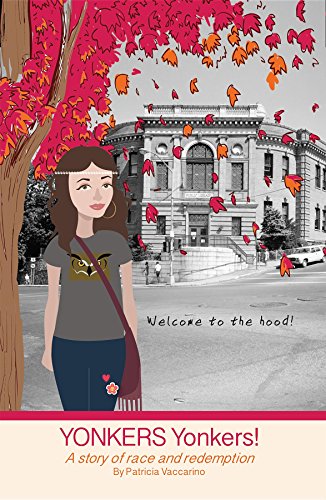 YONKERS Yonkers! Is a coming-of-age story of race and redemption. Cookie Colangelo is an unlikely heroine.  Being a good girl has gotten Cookie nowhere, so she’s become a small-time drug dealer, a troublemaker, and an indomitable force to reckon with, one who will take no prisoners as she cuts a mighty swath through the city of Yonkers. Cookie is going down the wrong path until shy black boy Herman Lynch comes into her life. Everywhere Cookie goes, she keeps bumping into Herman. Down The End, on the wall at Untermyer Park, in Getty Square and at the Yonkers Carnegie Library. Born with a harelip, Herman Lynch is a black B-boy, a natural dancer, who has had no formal dance training. He lives near Slow Bomb, the Schlobohm Housing Projects. The other black boys don’t like Herman and think he’s not black enough. The Italian girls of Yonkers don’t like Cookie, saying she’s too white. Together, Cookie and Herman explore the heart of racial prejudice in working-class Yonkers circa 1969-71. Rich with history and exacting detail: the Vietnam War has divided the country, Richard Nixon is in the White House and activists are marching in the streets. The story of Cookie Colangelo and Herman Lynch is told against the backdrop of the music of the times from Woodstock to the deaths of Blind Owl Alan Wilson, Jimi Hendrix, Janis Joplin and Jim Morrison.