Showing Templar, Cathar, Soldier, King.: Part One of The Chronicles of the Forgotten Kingdom. by Jeremy Ottewell 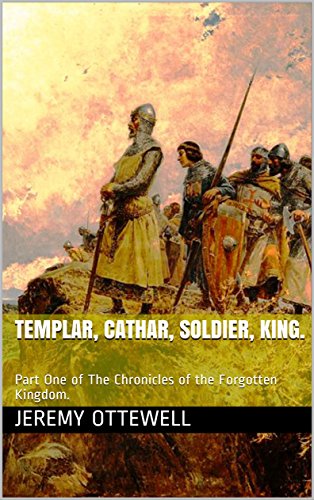 Catalonia, 1274. Life is good for Josep and his English mother, who are adopted by a cultivated, well-connected family near Barcelona. But around them in the hills, Muslims are being brutally attacked and murdered.
Is Josep’s adoptive uncle, an almogaver, a Catalan warrior, responsible for this? In the absence of Josep's father, Jacques de Molay, a close family friend and a rising star in the Knights Templar, offers to find somewhere Josep can train to be a page.
Unwittingly involved in a revolt of nobles against the House of Barcelona, Josep begins to see that the violence, conflict and intrigue that surround him extend beyond the borders of Catalonia and Aragon to France, Italy and the Mediterranean. Josep sets out on a journey to discover the identity of his father that will win him powerful friends but also expose him to ruthless, pitiless enemies.
1282. An epic David-and-Goliath power struggle is about to break out in the Mediterranean, pitting great kings against pauper crowns, popes against emperors and chivalric tradition against almogaver savagery. Josep will find himself in the middle of the action. What is the role of the Templars in this scenario? Who is Josep’s father? And what does he have to do with the mountain dwellers who have fled to the Pyrenees from the south of France?