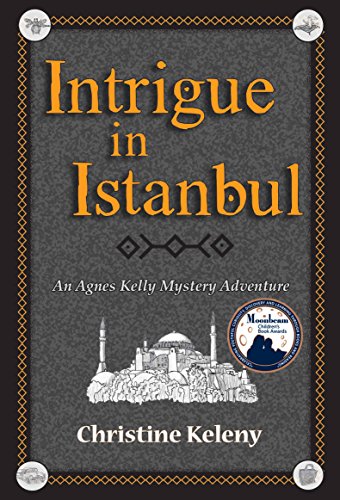 "Intrigue in Istanbul: An Agnes Kelly Mystery Adventure" is set in 1961, a time of the cold war and space race. But that isn t on Agnes' radar. Her dad has died and during a trip with her grandmother to Istanbul, she accidentally finds out it was under suspicious circumstances, but that's just the beginning.

Book One of the Agnes Kelly Mystery Adventure Series will make you laugh, set you on the edge of your seat, and leaving you wanting more - both the older and younger reader alike.

"Agnes Kelly, a girl growing up in the 1960’s, is not unlike twelve year old girls of the 21st century. She is inquisitive, observant and thoughtful. Middle school readers will relish Intrigue in Istanbul-An Agnes Kelly Mystery Adventure by Christine Keleny from start to finish..."
Jill Peterson, teacher of 5th & 6th Grade Language Arts, Raymond, Wisconsin

If you enjoy Alan Bradley's Flavia de Luce, you'll enjoy Christine Keleny's Agnes Kelly. She is the 1960s American version of Flavia de Luce. Agnes is the Scout of the Upper Midwest.

Everyone at the table is as surprised by Grandma’s little maneuver as I am, but I’m not looking at my relatives or even at Peggy, I’ve got my eyes glued on Grandma Agee. She’s reading Uncle Bob the riot act over at the dessert table…I’m concentrating hard on Grandma’s face, specifically her lips. But she’s turned ever so slightly away from me so I can only make out a bit of what she’s saying: “I told ya…” and “…button your lip.” among the finger wagging and eye scowling she’s giving poor Uncle Bob.
With Grandma’s odd reaction and my dad being gone, unable to explain himself to me ever again, I feel an urgent need to find out is what in the world did he “get into” that Grandma Agee doesn’t want me to know about.