Showing See What I Have Done by Sarah Schmidt 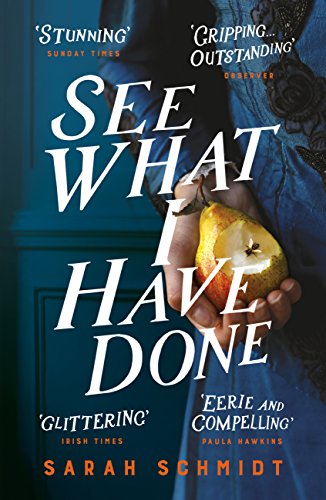 Haunting, gripping and gorgeously written, SEE WHAT I HAVE DONE by Sarah Schmidt is a re-imagining of the unsolved American true crime case of the Lizzie Borden murders, for fans of BURIAL RITES and MAKING A MURDERER.

'Eerie and compelling, Sarah Schmidt breathes such life into the terrible, twisted tale of Lizzie Borden and her family, she makes it impossible to look away' Paula Hawkins

When her father and step-mother are found brutally murdered on a summer morning in 1892, Lizzie Borden - thirty two years old and still living at home - immediately becomes a suspect. But after a notorious trial, she is found innocent, and no one is ever convicted of the crime.

Meanwhile, others in the claustrophobic Borden household have their own motives and their own stories to tell: Lizzie's unmarried older sister, a put-upon Irish housemaid, and a boy hired by Lizzie's uncle to take care of a problem.

This unforgettable debut makes you question the truth behind one of the great unsolved mysteries, as well as exploring power, violence and the harsh realities of being a woman in late nineteenth century America.