Showing The Claimant : the extraordinary story of the Australian butcher who said he was a Baronet by Paul Terry 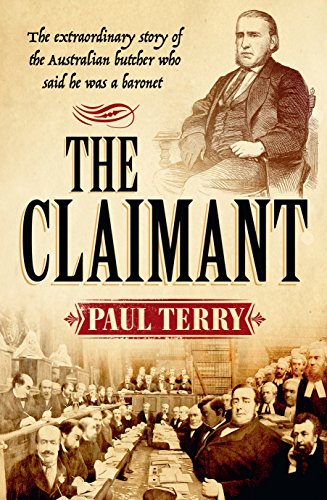 It’s 1866, and from the dusty frontier town of Wagga Wagga comes a man who sets Victorian England alight – the likes of which have never been seen before or since.
A tale so preposterous that its veracity is still debated today.

Tom Castro – or was he Arthur Orton? – an obese, toothless butcher who lives in a slab-hut with his illiterate wife and children, suddenly comes forward and claims he is Roger Tichborne, the rightful Baronet of Tichborne Park, Hampshire, and head of one of England’s oldest, most noble Catholic families.

So sets in motion a journey that takes our unlikely nobleman on a rollercoaster ride of fame, glory, prison and penury, unleashes the Tichborne Curse, disturbs Queen Victoria, delights Mark Twain, immortalises our Claimant in wax at Madame Tussauds, and strikes at the very heart of the English class system.
And, at the end of a tumultuous life, a strange posthumous victory to the Claimant leads some to still ask the question – was he Roger Tichborne, a baronet, or Tom Castro, a butcher?