Showing Push Not the River by James Conroyd Martin 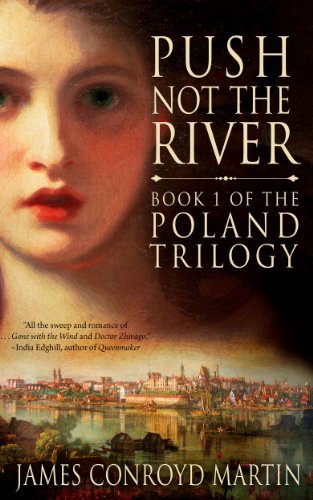 A panoramic and epic novel in the grand romantic style, PUSH NOT THE RIVER is the rich story of Poland in the late 1700s--a time of heartache and turmoil as the country's once peaceful people are being torn apart by neighboring countries and divided loyalties. It is then, at the young and vulnerable age of seventeen, when Lady Anna Maria Berezowska loses both of her parents and must leave the only home she has ever known.

With Empress Catherine's Russian armies streaming in to take their spoils, Anna is quickly thrust into a world of love and hate, loyalty and deceit, patriotism and treason, life and death. Even kind Aunt Stella, Anna's new guardian who soon comes to personify Poland's courage and spirit, can't protect Anna from the uncertain future of the country.

Anna, a child no longer, turns to love and comfort in the form of Jan, a brave patriot and architect of democracy, unaware that her beautiful and enigmatic cousin Zofia has already set her sights on the handsome young fighter. Thus Anna walks unwittingly into Zofia's jealous wrath and darkly sinister intentions. Forced to survive several tragic events, many of them orchestrated by the crafty Zofia, a strengthened Anna begins to learn to place herself in the way of destiny--for love and for country. Heeding the proud spirit of her late father, Anna becomes a major player in the fight against the countries who come to partition her beloved Poland.

PUSH NOT THE RIVER is based on the true eighteenth century diary of Anna Maria Berezowska, a Polish countess who lived through the rise and fall of the historic Third of May Constitution. Vivid, romantic, and thrillingly paced, it paints the emotional and unforgettable story of the metamorphosis of a nation--and of a proud and resilient young woman.