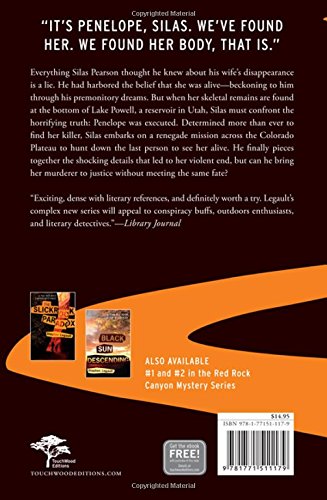 Five years ago, Silas Pearson's wife Penelope disappeared on a backpacking trip into the Utah desert. When Penelope begins to haunt Silas's dreams he thinks she is leading him to her, but instead he uncovers a series of gruesome murders. When a house boater finds Penny's skeletal remains entangled in some driftwood in Lake Powell, Silas is stricken with grief, and he struggles to understand just what it was his dreams were trying to tell him. Silas learns that Penelope's death was not an accident--but an execution--and he embarks on a renegade mission across the Colorado Plateau to discover the identify of her killer. Silas believes his wife's murder was connected to her advocacy so he confronts a host of high-profile suspects along the way who stood to gain from the destruction of the American desert. But nothing is as it seems in the canyons of Utah and Arizona. The final installment in the Red Rock Canyon Mystery series offers up the missing pieces in the puzzle of Penelope's disappearance, and uncovers the horrible truth about who wanted her dead and why.