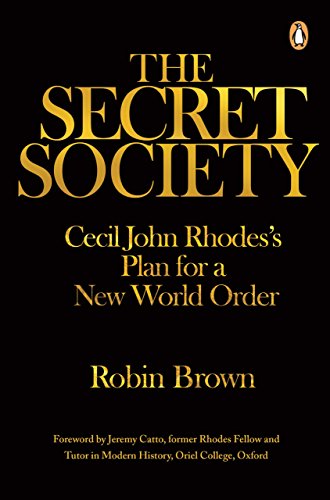 Cecil John Rhodes made a fortune from diamonds and gold, became prime minister of the Cape, and had a country named after him, but his ambitions were far greater than that. When he was still in his twenties, after a meeting with General Gordon of Khartoum, Rhodes set up a Secret Society with the aim of establishing a new world order. The society, disciplined on Jesuit-style rules, became Rhodes’s lifelong obsession, and after his death it lived on and grew under the leadership of his executor, Lord Alfred Milner.
The society played a key role in the governance of Britain during the Great War and the peace terms to end it, and it was linked to appeasement initiatives involving Hitler, the Duke of Windsor and Mrs Simpson before World War II. Echoes of the Secret Society survive in different guises to this day, including the Royal Institute of International Affairs (Chatham House) and the Rhodes Scholarships.
In The Secret Society, Robin Brown unpacks this astonishing and largely unknown history. He brings Rhodes, his companions and his successors to life by drawing from diaries and letters, and sheds new light on Rhodes’s homosexuality. Ranging from the diamond mines of Kimberley to the halls of power in Westminster, and peopled with characters such as General Gordon, Leander Starr Jameson, W.T. Stead, Olive Schreiner, the Princess Radziwill, Joseph Chamberlain and David Lloyd George, this book is a page-turner that will make you see the world, both past and present, in a different light.