Showing Murder in an Irish Village by Carlene O'Connor 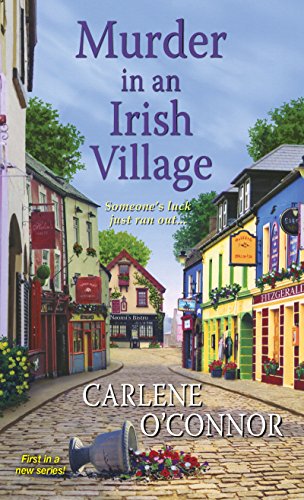 A little slice of Heaven on the Emerald Isle…

In the small village of Kilbane, County Cork, Ireland, Naomi’s Bistro has always been a warm and welcoming spot to visit with neighbors, enjoy some brown bread and tea, and get the local gossip. Nowadays twenty-two-year-old Siobhán O’Sullivan runs the family bistro named for her mother, along with her five siblings, after the death of their parents in a car crash almost a year ago.

It’s been a rough year for the O’Sullivans, but it’s about to get rougher. One morning, as they’re opening the bistro, they discover a man seated at a table, dressed in a suit as if for his own funeral, a pair of hot pink barber scissors protruding from his chest.

With the local garda suspecting the O’Sullivans, and their business in danger of being shunned—murder tends to spoil the appetite—it’s up to feisty redheaded Siobhán to solve the crime and save her beloved brood.

“If Janet Evanovich and Maeve Binchy wrote a book together, Murder in an Irish Village would be the result. The Irish setting rings with authenticity and Siobhan O'Sullivan is a character to savor. She's funny, feisty, and fearless. I want her to be my new best friend. I also want another book by Carlene O’Connor to read. This one is delicious fun.”—Laurien Berenson, author of Live and Let Growl

“A smart whodunnit in an idyllic locale. I dare you not to be charmed by sleuth Siobhan and her siblings, the O’Sullivan Six.”—Barbara Ross, author of Musseled Out

“A delightful, funny, fast-paced romp of a book. O’Connor has written a vivid evocation of life in a small Irish town, an evocation replete with sharp characterizations and dialogue real enough to make you believe you’re sitting in an Irish pub. A satisfying read that will keep you entertained from the first to the last page.”—Isis Crawford, author of A Catered Tea Party