Showing Sands of Time: Fate of the True Vampires (Volume 1) by Christine Church 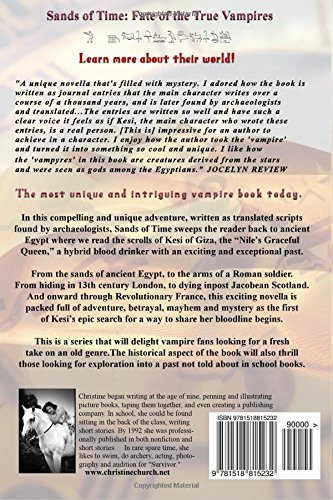 Praise for Sands of Time: Fate of the True Vampires: "Above and beyond conventional vampire stories...The writing style is unusual and interesting...Sands of Time does not drag its way into boredom. The story is compelling enough to keep the reader turning the pages." Lex Allen, Reader's Favorite "This is truly not a typical vampiric read and I wish I could give it more than five stars. I can't wait for the release of the second book and I applaud this author's ingenuity." The Voluptuous Book Diva Mysteries uncovered from tombs. Secrets dug up from the grave. The truth about vampires has been unearthed. These are the unearthed scrolls of an ancient immortal and her desperate quest to save her bloodline and future children from extinction. In this compelling and unique adventure, written as translated scripts found by archaeologists, Sands of Time sweeps the reader back to ancient Egypt where we read the scrolls of Kesi of Giza, the "Nile's Graceful Queen," a hybrid blood drinker with an exciting and exceptional past. From the sands of ancient Egypt, to the arms of a Roman soldier. From hiding in 13th century London, to dying in post Jacobean Scotland and through Revolutionary France, this short page turner is packed full of adventure, betrayal, mayhem and mystery as the first of Kesi's epic search for a way to share her bloodline begins. This is a series that will delight vampire fans looking for a fresh take on an old genre. The historical aspect of the book will also thrill those looking for exploration into a past not told about in school books. "There is some commonality with the lore of vampires [found in] Anne Rice's Vampire Chronicles, yet [Ms. Church's] vampires have an alternate origin that incorporates theories of the purpose of the great pyramids and how they were built. The story thankfully lacks the teen angst of Stephanie Meyers' Twilight series and has much better writing than what I've read in those and related supernatural romance books about vampir