Showing Learning How to Lose, in Six Easy Steps. Step One: Tetris / Step Two: Fun and Games by Alex Gabriel 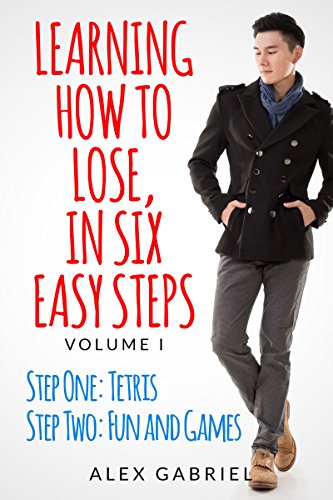 It’s not that Ryuu’s a bad loser – he just wants things to be in order. And in the natural order of the universe, he should not be losing to dorks.


Losing is a thing Japanese pop star Ryuu Shiwasuda does not do – certainly not gracefully. Image is everything to hot-headed Ryuu. Sure, his macho bluster is only a cover for shyness and social awkwardness, but he takes it (and himself) very seriously.

So when gratingly cheerful punster Hiro Takahashi delivers the ultimate insult of letting Ryuu win at a video game, Ryuu is cut to the quick, and vows swift vengeance. Can’t be too hard to beat a dork like Hiro, right?

Wrong. As Ryuu chases after his elusive victory, he’s forced to add more and more items to the list of “things to beat Hiro at” – and is shocked to find that Hiro’s quirky charm is sparking never-before felt desires in him.

Ryuu’s life and career have no place for a male lover. But he’s already in too deep. Can he risk going all in? And what does he stand to lose if he doesn’t?

Don’t miss the other books in the series!

Volume I:
Step One: Tetris
Step Two: Fun and Games