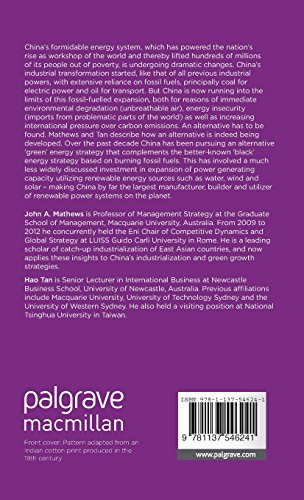 China's formidable energy system, which has powered the nation's rise as workshop of the world and thereby lifted hundreds of millions of its people out of poverty, is undergoing dramatic changes. China's industrial transformation started, like that of all previous industrial powers, with extensive reliance on fossil fuels, principally coal for electric power and oil for transport. But China is now running into the limits of this fossil-fuelled expansion, both for reasons of immediate environmental degradation (unbreathable air), energy insecurity (imports from problematic parts of the world) as well as increasing international pressure over carbon emissions. An alternative has to be found. Mathews and Tan describe how an alternative is indeed being developed. Over the past decade China has been pursuing an alternative 'green' energy strategy that complements the better-known 'black' energy strategy based on burning fossil fuels. This has involved a much less widely discussed investment in expansion of power generating capacity utilizing renewable energy sources such as water, wind and solar - making China by far the largest manufacturer, builder and utilizer of renewable power systems on the planet.