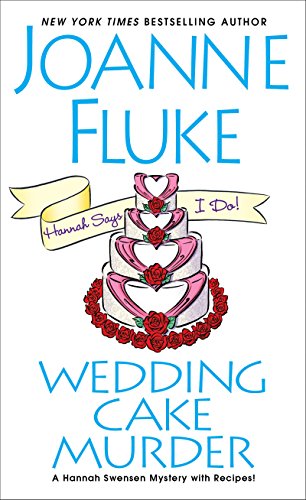 Everyone in Lake Eden, Minnesota, may have had their doubts, but at long last, Hannah Swensen is getting married!

Hannah is thrilled to be marrying Ross Barton, her college crush. And her excitement only grows when she learns he’ll be able to join her on her trip to New York City for the Food Channel’s dessert chef contest. They get a taste of the Big Apple before Hannah wins the Hometown Challenge and the producers bring all the contestants to Lake Eden to tape the remainder of the show. It’s nerve-wracking enough being judged by Alain Duquesne, a celebrity chef with a nasty reputation. But it’s even more chilling to find him stabbed to death in the Lake Eden Inn’s walk-in cooler—before he’s even had a chance to taste Hannah’s Butterscotch Sugar Cookies! Now Hannah has not only lost her advantage, she’ll have to solve a mystery with more layers than a five-tiered wedding cake…

“Lively…Add the big surprise ending, and fans will be more than satisfied.” —Publishers Weekly

“Fluke offers a new twist to the series…the cookie-shop owner’s character gains depth…but there’s still room for recipes and for Hannah to move toward an overdue decision on the question of which of her two boyfriends she prefers. Readers will be eager for the next installment.” —Booklist

“Culinary cozies don’t get any tastier than this winning series.” —Library Journal

“If your reading habits alternate between curling up with a good mystery or with a good cookbook, you ought to know about Joanne Fluke.” —The Charlotte Observer

“Fans of this wildly popular series will not be disappointed. Fluke has kept this series strong for a long time, and there is still plenty to enjoy for foodie crime fans.” —Booklist