Showing Our Lady of the Ice by Cassandra Rose Clarke 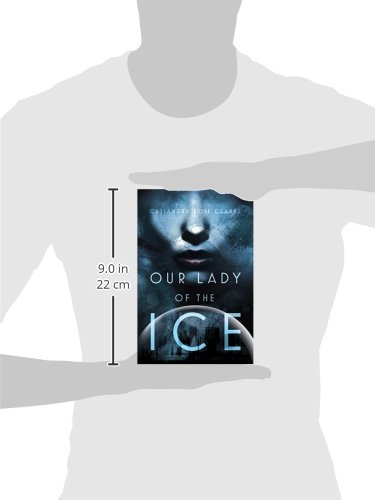 "The Yiddish Policeman s Union" meets "The Windup Girl "when a female PI goes up against a ruthless gangster just as both humans and robots agitate for independence in an Argentinian colony in Antarctica. In Argentine Antarctica, Eliana Gomez is the only female PI in Hope City a domed colony dependent on electricity (and maintenance robots) for heat, light, and survival in the icy deserts of the continent. At the center is an old amusement park now home only to the androids once programmed to entertain but Hope City s days as a tourist destination are long over. Now the City produces atomic power for the mainland while local factions agitate for independence and a local mobster, Ignacio Cabrera, runs a brisk black-market trade in illegally imported food. Eliana doesn t care about politics. She doesn t even care much that her boyfriend, Diego, works as muscle for Cabrera. She just wants to save enough money to escape Hope City. But when an aristocrat hires Eliana to protect an explosive personal secret, Eliana finds herself caught up in the political tensions threatening to tear Hope City apart. In the clash of backstabbing politicians, violent freedom fighters, a gangster who will stop at nothing to protect his interests, and a newly sentient robot underclass intent on a very different independence, Eliana finds her job coming into deadly conflict with Diego s, just as the electricity that keeps Hope City from freezing begins to fail From the inner workings of the mob to the story of a revolution to the amazing settings, this story has got it all. Ultimately, however, "Our Lady of the Ice" questions what it means to be human, what it means to be free, and whether we re ever able to transcend our pasts and our programming to find true independence."