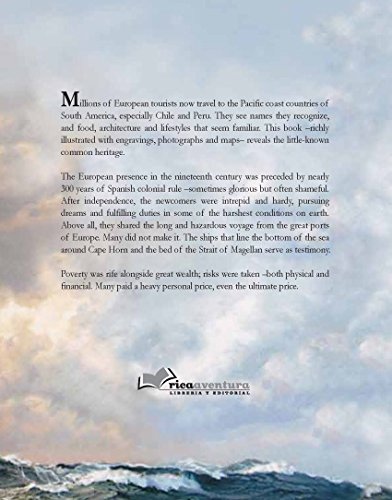 Tourists visiting Chile and Peru will discover many remnants of the nearly 500 years of European presence. From the Conquistadors of Spain, though the pirates, explorers, travelers and immigrants who braved months of the most treacherous and uncomfortable voyage imaginable to reach the Pacific shores of South America. Miners, engineers, bankers, doctors, educators, priests, soldiers, sailors found their way by accident or design, to start new lives, to seek fortunes and to lose them. They were brave, tough, clever, ingenious, resourceful and entrepreneurial. They were French, German, Scandinavian, Italian, Central European, Scandinavian and, especially, British.Many chose to live and work in some of the most extreme conditions on the planet. They survived the roughest seas, earthquakes, floods, drought, fires and attack. A lot did not make it. Their legacy survives on the tourist routes in places like Valparaiso, so too does a sense of the style of life they brought with them from the old continent. This book seeks to bring together all the threads from a remarkable time marked by remarkable people.