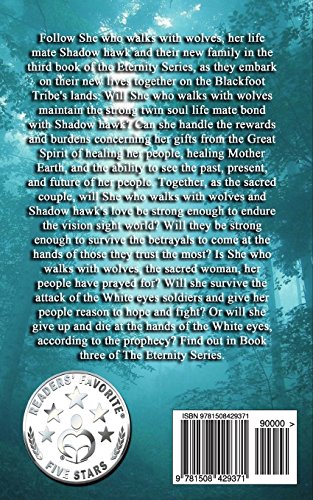 Follow She who walks with wolves, her life mate Shadow hawk and their new family in the third book of the Eternity Series, as they embark on their new lives together on the Blackfoot Tribe's lands. Will She who walks with wolves maintain the strong twin soul life mate bond with Shadow hawk? Can she handle the rewards and burdens concerning her gifts from the Great Spirit of healing her people, healing Mother Earth, and the ability to see the past, present, and future of her people. Together, as the sacred couple, will She who walks with wolves and Shadow hawk's love be strong enough to endure the vision sight world? Will they be strong enough to survive the betrayals to come at the hands of those they trust the most? Is She who walks with wolves, the sacred woman, her people have prayed for? Will she survive the attack of the White eyes soldiers and give her people reason to hope and fight? Or will she give up and die at the hands of the White eyes, according to the prophecy? Find out in Book three of The Eternity Series. "The Twin Souls is a vivid and intense novel comprised of two stories set in two Native American tribes. It is full of suspense and drama and is about the difficult circumstances under which lovers meet and the challenges they face later on due to sadistic people who target the heroines. There is a deeply spiritual way in which Holly Newhouse depicts her heroines. They both are extremely self sacrificing, caring and also brave. Their male counterparts are protective archetypal heroes with soft hearts. The twists in the story are gripping and the situations are very believable, making this work potentially popular in the historical and cultural genres. The narrative emphasises the theme of twin souls, their instant recognition and desperate desire to be with each other against all odds. Newhouse paints romance effortlessly in such a way as to allow it to be realistic, passionate, bold and transcendental. There is a wonderful closeness and merging th