Showing We are going to kill each other today: The Marikana Story by Thanduxolo Jika 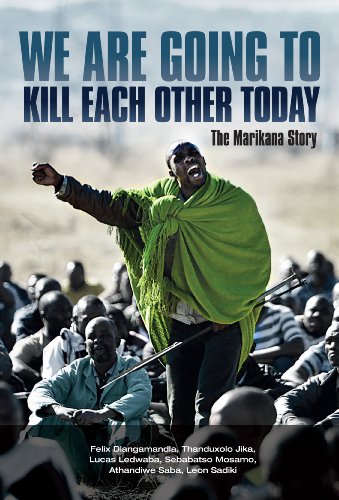 'Tomorrow morning, the men will sing again. Their spears, pangas, inculas and sticks will clatter menacingly. They will recite battle cries from their homelands, and move about in organised columns, raising clouds of dust. But 34 of them will sing for the very last time.'


In August 2012, after a standoff lasting several days, South African police opened fire on armed mineworkers who had gathered on a koppie at Marikana in North West Province. The mineworkers were on strike in defiance of their employer, their trade union, formal wage agreements, and ultimately, the South African state. Thirty-four were killed, and many more were wounded.

The shootings provoked a national and international outcry, and invited comparisons with the Sharpeville massacre that happened under apartheid. Describing the loss of life among workers and others as 'tragic and regrettable', the government appointed a commission of inquiry which was still in session ten months later.

Among the people drawn to Marikana were reporters and photographers working for the newspaper City Press. Profoundly affected by their experiences, they embarked on a journey to uncover the 'story behind the story' - where the mineworkers had come from, how they had lived, the impacts of their deaths on their families and communities, and what had driven them to take such drastic action. Their quest took them into the sprawling shack settlements around Marikana, poverty-stricken neighbouring states, and the desolate hinterlands of the Eastern Cape.

Their reportage won the 'story of the year' category in the 2013 Standard Bank Sikuvile Journalism Awards. This book draws on and extends their prize-winning work. Poignant, revealing, and sometimes shocking, it provides a riveting account of the events before, during, and after the strike, and its significance for post-apartheid South Africa.

In this book their accounts are enriched with valuable source material, including edited versions of evidence by key witnesses to the commission of inquiry, and a seminal analysis of the causal role played by the migrant labour system in the ongoing labour crisis in the South African mining industry.