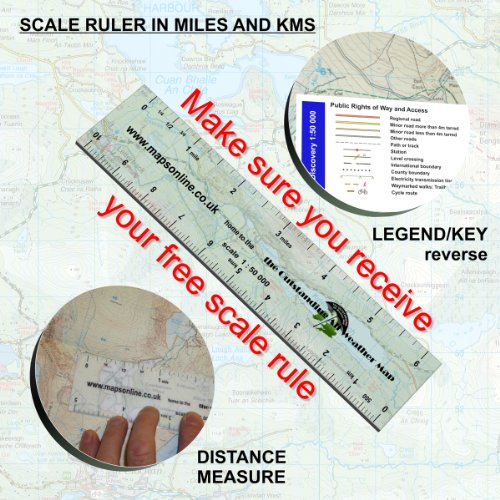 Outstanding All Weather Maps outlast other similar products because they are prepared using premium quality polyester film - much tougher than the cheaper, more commonly used polypropylene. Resistant not only to the weather, but also to general wear and tear; this map can even be used to shelter under in a downpour, and comes supplied with a handy distance measuring ruler specifically printed for use with 1:50 000 scale mapping. When placed onto the map it allows the user to instantly read off point to point distances (as the crow flies) in either miles or kilometers. Discovery maps are the Irish equivalent of the OS Landranger series; designed for walkers, ramblers, off-road cyclists and horse riders, displaying extensive tourist information. There are no Explorer equivalent maps (1:25 000 scale) for Ireland, but the Discovery mapping is very detailed, allowing it to be as useful for walking as possible. Relief is shown by layered tints with contours at 10 metre vertical intervals which adds to the map's appeal. Footpaths, tracks and waymarked walks are identified, as well as cycle routes including the National Cycle Network. The map provides comprehensive information on land features including canals, footbridges, tidal limits, marsh, cliffs, and vegetation type as well as more general detail such as churches, post offices and public houses. Information for tourists includes camp and caravan sites, gardens, golf courses, information and visitor centres, picnic sites, public conveniences, telephones, viewpoints, bus stations and youth hostels. There are altogether 93 maps in the Discovery / Discoverer series in total; which cover the entirety of Ireland; 75 "Discovery" maps are published by Ordnance Survey Ireland to cover Southern Ireland, and running alongside these 18 "Discoverer" maps are produced by Ordnance Survey of Northern Ireland to cover areas in Northern Ireland.