Showing A Warrior Dynasty: The Rise and Fall of Sweden as a Military Superpower, 1611-1721 by Henrik Lunde 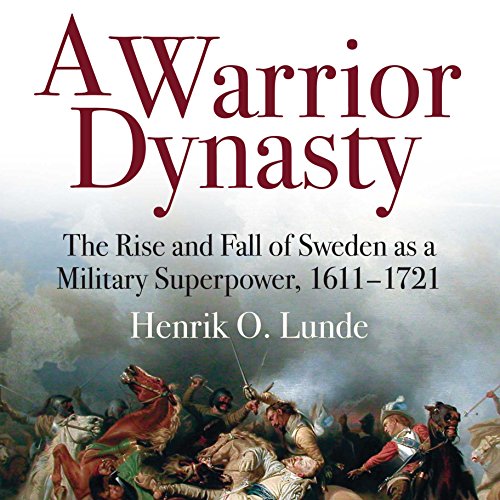 This audiobook examines the meteoric rise of Sweden as the pre-eminent military power in Europe during the Thirty Years War during the 1600s, and then follows its line of warrior kings into the next century until the Swedes finally meet their demise, in an overreach into the vastness of Russia. A small Scandinavian nation, with at most one and a half million people and scant internal resources of its own, there was small logic to how Sweden could become the dominant power on the Continent. That Sweden achieved this was due to its leadership - a case-study in history when pure military skill, and that alone, could override the demographic and economic factors which have in modern times been termed so pre-eminent. Once Protestantism emerged, via Martin Luther, the most devastating war in European history ensued, as the Holy Roman Empire sought to reassert its authority by force. Into this bloody maelstrom stepped Gustav Adolf of Sweden, a brilliant tactician and strategist, who with his finely honed Swedish legions proceeded to establish a new authority in northern Europe. Gustav, as brave as he was brilliant, was finally killed while leading a cavalry charge at the Battle of Ltzen. He had innovated, however, tactics and weaponry that put his successors in good stead, as Sweden remained a great power, rivaled only by France and Spain in terms of territory in Europe. And then one of his successors, Karl XII, turned out to be just as great a military genius as Gustav himself, and as the year 1700 arrived, Swedish armies once more burst out in all directions. Karl, like Gustav, assumed the throne while still a teenager, but immediately displayed so much acumen, daring and skill that chroniclers could only compare him, like Gustav, to Alexander the Great. This book examines thoroughly, yet in highly readable fashion, the century during which Swedish military power set an example for all Europe.