Showing The Blacks of Cape Town by C.A. Davids 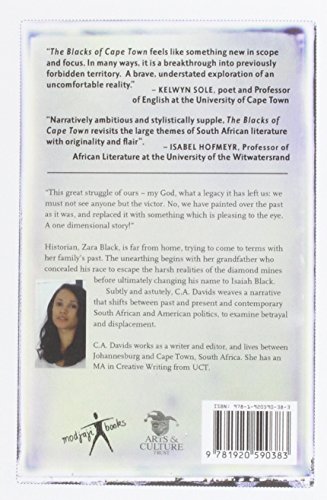 Historian, Zara Black, is in an unfamiliar room in a country far from home, when she is awoken by music that evokes memories she has been trying to forget. It is this call from her father, seemingly from beyond the grave, that finally pushes Zara to accept that it falls to her to understand the occurrences that forced her away from Cape Town and into a scholarly position that she does not entirely want, at a New Jersey University. In the officious but vague letter from the South African government, Zara learns that documents once sealed and implicating her father in an act (while not clearly defined, was committed against the anti-apartheid movement decades earlier) will soon be released to the public. The letter becomes the start of a journey into Zara's past. This unearthing of the past begins with Isaiah Black the grandfather that 'started it all' when he stole a handful of diamonds from one of the world's largest diamond mines in Kimberley. This act, however, is overshadowed by what the family acknowledges as the greater crime - concealing his race (Isaiah was 'mixed race') to escape the harsh realities of the mines before abandoning his mother and ultimately changing his name to Isaiah Black. A name that, according to granddaughter Zara is not without irony, because, '...Her grandfather, self-named Isaiah Black, had been classified as mixed, had passed as white and given rise to a line of coloured children and grandchildren.' The narrative, in split chapter form, shifts between past and present - from New Jersey where Zara finds herself alone and displaced, but caught up in the excitement of an American election of a new and historic president, to South Africa of the past and present. Her task is great and she grapples with constructing a history for herself and her family from between fragmented recollections and family lore.