Showing Warning : the story of Cyclone Tracy by Sophie Cunningham 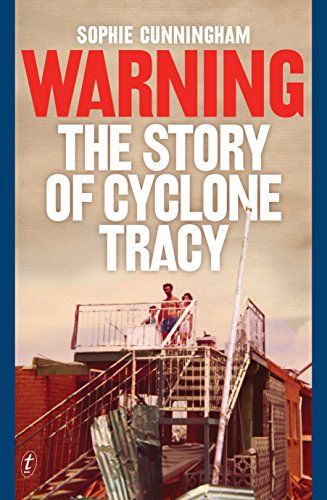 Warning is the definitive account of one of the most frightening extreme weather events our country has ever seen.

When Cyclone Tracy swept down on Darwin at Christmas 1974, the weather became not just a living thing but a killer. Tracy destroyed an entire city, left seventy-one people dead and ripped the heart out of Australia's season of goodwill.

For the fortieth anniversary of the nation's most iconic natural disaster, Sophie Cunningham has gone back to the eyewitness accounts of those who lived through the devastation, and those who faced the heartbreaking clean-up and the back-breaking rebuilding. From the quiet stirring of the service-station bunting that heralded the catastrophe to the wholesale slaughter of the dogs that followed it, Cunningham brings to the tale a novelist's eye for detail and an exhilarating narrative drive. And a sober appraisal of what Tracy means to us now, as we face more - and more destructive - extreme weather with every year that passes.

Compulsively readable and undeniably moving, Warning is the essential non-fiction book of 2014.

Sophie Cunningham is the author of two novels, Geography (2004) and Bird (2008) and the non-fiction Melbourne (UNSW Press, 2011). She is a former editor of Meanjin and was until recently the chair of the Australia Council's Literature Board.

‘The strength and beauty of this book is the way it delves into the lives of the people affected and tries to understand their responses, their courage and their failings. Cunningham argues that these kinds of natural disasters are going to become more prevalent as the effects of climate change make extreme weather conditions more likely. This book is no polemic: it’s a gripping and visceral tale.’ Mark Rubbo, Readings

‘Cunningham has pieced together a pacey and energetic insight into the build up, experience and aftermath of the cyclone...It’s a great read and, given the subject, it is strangely hopeful.’ Big Issue

‘Along with an eye for good stories and a knack for telling them, Sophie Cunningham brings a contextualising political intelligence. What she is interested in is how natural disasters are also social and political events, and the period details amount to more than the sideburns and lairy shirts...What happens in natural disasters depends on how communities work; the effects and aftermaths of those disasters are in fact man-made. As the future promises more and more extreme weather events whose causes as well as effects are anthropogenic, Cunningham’s gripping book contributes to new ways of thinking about them.’ Sunday Age/Sun Herald

‘Sophie Cunningham has done a tremendous job in gathering the voices - from then and now - of those who were there and during the clean-up [of Cyclone Tracy]. The result is vivid storytelling, gripping from beginning to end.’ Townsville Bulletin/Cairns Post

‘Warning: The Story of Cyclone Tracy is a brilliant book and on the anniversary of such devastation, it is a timely reminder to cherish everything you have in your life because in one night it could all be blown away.’ Salty Popcorn