Showing The Luminous Heart of Jonah S. by Gina B. Nahai 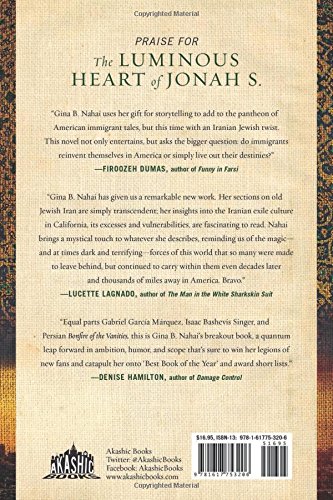 From Tehran to LA, The Luminous Heart of Jonah S. is a sweeping saga that tells the story of the Soleymans, an Iranian-Jewish family tormented for decades by Raphael's Son, an unscrupulous financier who futilely claimed to be an heir to the family fortune. 40 years later in Los Angeles, Raphael's Son has nearly achieved his goal - until he suddenly disappears, presumed to have been murdered. The possible suspects are legion. By turns hilarious and affecting, Nahai examines the eternal bonds of family and community, and the lasting scars of exile.