Showing War Stories Volume I: D-Day to the Liberation of Paris by Robert O. Babcock 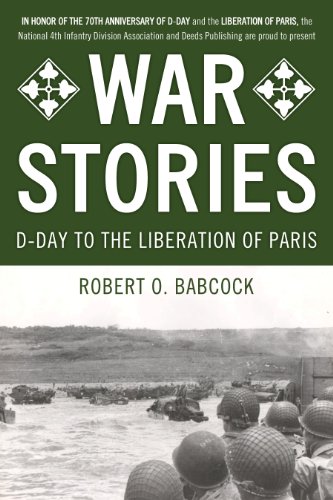 At H-Hour on D-Day—June 6, 1944—the 4th Infantry Division landed on Utah Beach, becoming the first Allied division to land on the shores of Normandy, France. For the next eleven months, the 4ID fought across France, Belgium, Luxembourg, and Germany until the war in Europe ended on May 8, 1945. The division suffered over 30,000 casualties—killed and wounded. This book, the first of a three-book series, tells the history of the 4th Infantry Division in WWII through the stories of those who fought the battles.

Volume I of this two-volume series covers:

- The D-Day landing
- The fight to liberate the port of Cherbourg
- The hedgerow fighting through June and July 1944
- Operation Cobra and the St. Lo breakout on July 25, 1944
- The continuing fight that culminated with the liberation of Paris on August 25, 1944.

Volume II continues the story with:

- The breaching of the Siegfried Line on September 11, 1944
- The bloodiest fight of the division’s history in the Hurtgen Forest
- Holding the southern shoulder of the Battle of the Bulge
- The fight back through the Siegfried Line, Prum, across the Rhine, and continuing the fight until V-E day on May 8, 1945.

Volume III covers the 4ID in Vietnam from 1966 to 1970. These three books are subsets of War Stories: Utah Beach to Pleiku, first published in 2001.