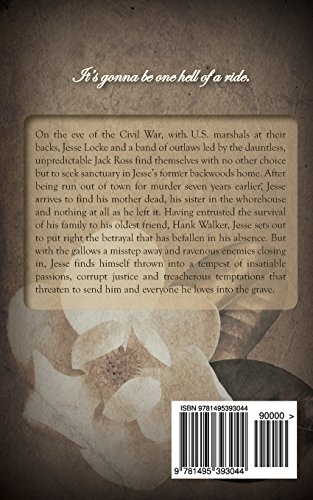 It's gonna be one hell of a ride... On the eve of the Civil War, with U.S. marshals at their backs, Jesse Locke and a band of outlaws led by the dauntless, unpredictable Jack Ross find themselves with no other choice but to seek sanctuary in Jesse's former backwoods home. After being run out of town for murder seven years earlier, Jesse arrives to find his mother dead, his sister in the whore house and nothing at all as he left it. Having entrusted the survival of his family to his oldest friend, Hank Walker, Jesse sets out to put right the betrayal that has befallen in his absence. But with the gallows a misstep away and ravenous enemies closing in, Jesse finds himself thrown into a tempest of insatiable passions, corrupt justice and treacherous temptations that threaten to send him and everyone he loves into the grave. Death of Eden: Outlaw is book one of the Death of Eden series.