Showing The Twin Souls: Love for an Eternity: Books 1 & 2 of the Eternity Series by Holly Newhouse 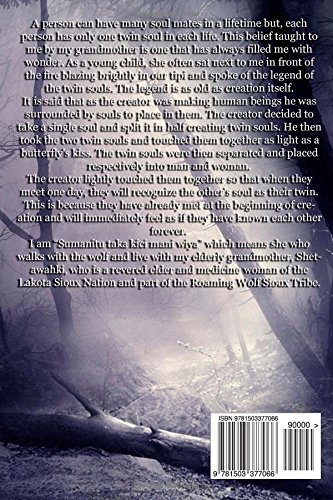 A person can have many soul mates in a lifetime but, each person has only one twin soul in each life. This belief taught to me by my grandmother is one that has always filled me with wonder. As a young child, she often sat next to me in front of the fire blazing brightly in our tipi and spoke of the legend of the twin souls. The legend is as old as creation itself. It is said that as the creator was making human beings he was surrounded by souls to place in them. The creator decided to take a single soul and split it in half creating twin souls. He then took the two twin souls and touched them together as light as a butterfly's kiss. The twin souls were then separated and placed respectively into man and woman. The creator lightly touched them together so that when they meet one day, they will recognize the other's soul as their twin. This is because they have already met at the beginning of creation and will immediately feel as if they have known each other forever. I am "Sumanitu taka kici mani wiya" which means she who walks with the wolf and live with my elderly grandmother, Shetawahki, who is a revered elder and medicine woman of the Lakota Sioux Nation and part of the Roaming Wolf Sioux Tribe.