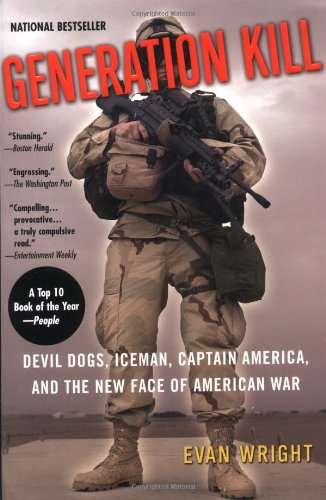 Based on Evan Wright's National Magazine Award-winning story in Rolling Stone, this is the raw, firsthand account of the 2003 Iraq invasion that inspired the HBO® original mini-series.

Within hours of 9/11, America’s war on terrorism fell to those like the twenty-three Marines of the First Recon Battalion, the first generation dispatched into open-ended combat since Vietnam. They were a new pop-culture breed of American warrior unrecognizable to their forebears—soldiers raised on hip hop, video games and The Real World. Cocky, brave, headstrong, wary and mostly unprepared for the physical, emotional and moral horrors ahead, the “First Suicide Battalion” would spearhead the blitzkrieg on Iraq, and fight against the hardest resistance Saddam had to offer.

Hailed as “one of the best books to come out of the Iraq war”(Financial Times), Generation Kill is the funny, frightening, and profane firsthand account of these remarkable men, of the personal toll of victory, and of the randomness, brutality and camaraderie of a new American War.