Showing JFK's Final Hours in Texas: An Eyewitness Remembers the Tragedy and Its Aftermath by Julian Read 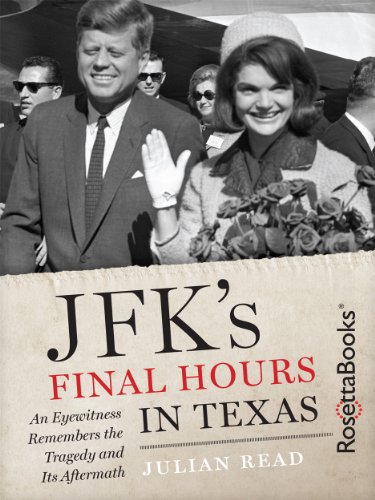 Julian Read, a Texas political insider who delivered the first eyewitness account of President John F. Kennedy's assassination to the media, has authored a behind-the-­scenes history of the tragedy and its fifty-year legacy. In JFK's Final Hours in Texas, Read documents not only the immediate agony endured by the people in the epicenter of the tragedy but also the continuing experience of a wounded community recovering from its aftermath.

Beyond capturing the drama following the assassination, Read illuminates the previously overlooked consequences of the aborted portion of the trip. He also traces the long aftermath of the assassination, including the intense bitterness towards Dallas and Texas. And in what he calls "the long journey from anguish to reconciliation," Read details the struggle to create the Sixth Floor Museum in downtown Dallas, located in the space from which Lee Harvey Oswald fired the assassination shots.

Read's very personal account surrounding the assassination and previously obscured facts of the president's Texas trip constitute a worthy addition to the record of a turbulent time.

Julian Read was a cub reporter for the Scripps-Howard Fort Worth Press at the age of 18. Six years later, he founded his own fledgling advertising and publicity shop. He soon scored two political campaign upsets that led to a lifetime of broad experience in the public sector. He became intimately involved in John B. Connally's successful campaign for governor of Texas in 1962 and remained his counselor and confidant for more than 30 years until Connally's death in 1993. He served as Connally's representative to the national media for John F. Kennedy's fateful visit to Texas in November 1963.

Read is a nationally prominent Texan corporate communications and public affairs counselor who has been part of the state's business and political scene for more than half a century. He founded and operated his own firm, Read-Poland Associates, for five decades before partnering with New York public relations executive Jeff Hunt to merge it with a global industry leader.

Based in Austin, Read continues to provide senior counsel for Cohn & Wolfe, a worldwide unit of London-based WPP. He also devotes much of his time in support of historic preservation.