Showing A Great Game: The Forgotten Leafs & the Rise of Professional Hockey by Stephen J. Harper 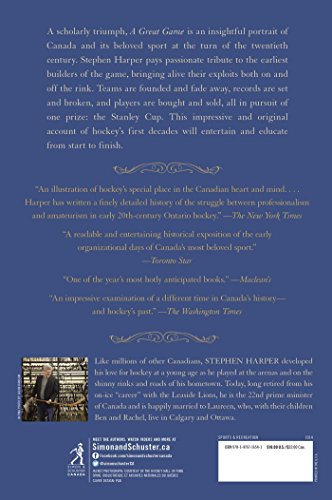 From Canada s twenty-second prime minister, the new trade paperback edition of the bestselling history of hockey s early days. Published to praise from reviewers in both the US and Canada, "A Great Game" brings alive the hockey heroes and hard-boiled businessmen who built the game of hockey and pays passionate tribute to the earliest star players of the game lavishly illustrated with captivating photographs throughout. Stephen Harper has crafted a "readable and entertaining historical exposition of the early organizational days of Canada's most beloved sport" ("Toronto Star"). With a historian s perspective and fan s passion, Harper presents a riveting, often-surprising portrait, capturing everything from the physical contests on the rinks to the battles behind the scenes and the changing social conventions of the twentieth century. "A Great Game" shows that many things have stayed the same. Rough play, fervent hometown loyalties, owner-player contract disputes, dubious news coverage, and big money were issues from the get-go. Harper s meticulous research yields "insightful examinations of class and religion and the roles they played in a country that still saw itself as a pillar of the British Empire, all viewed through the prism of hockey at the dawn of the pro era" ("The" "New York Times"). An instant Canadian bestseller, "A Great Game" resurrects the history of hockey s first decades. With photographs of the game s earliest arenas and star players, this impressive and original account will entertain and educate you from start to finish. "Thanks to Stephen Harper s impressive book of early hockey history in Toronto, the forgotten Leafs will be forgotten no more" ("The Washington Times")."